Don’t EVER use Video Testimonials.

I’m gonna say this over and over again throughout my blog posts, but VIDEO TESTIMONIALS STINK.

And although testimonials are supposed to be a story, people mistakenly think of testimonials as a recommendation for their business– about how GREAT your business is.

But no one wants to hear that.

Remember: It’s about your customers and their stories with you, not just about you.

There are 3 BIG Problems that Video Testimonials have that are constantly made in marketing.

Mistake #1: ASKING FOR VIDEO TESTIMONIALS ABOUT YOU.

“Hey, you just paid me, but I’m gonna have to ask you to tell good stuff about me on camera.”

And even though you’ve done an awesome job, it’s just SO DIFFICULT to think of what to say on camera.

Again, it’s not about YOU, it’s about THEM.

This brings us to my next point:

Mistake #2: SHOOTING VIDEO TESTIMONIALS GIVES OFF THE DEER IN THE HEADLIGHTS.

Have you ever seen a deer’s behavior in front of car headlights?

Almost like they’re robotic and not afraid of a huge chunk of metal running towards them at 50 miles per hour.

That is what happens when you ask people about how great you are.

But what happens if you ask them about their experience?

It brings out a whole new level of emotional investment.

Mistake #3: NOT ASKING FOR A VIDEO TESTIMONIAL STORY

If you don’t ask for a story, you don’t get a story.

And if you ask for a story- that’s right- you get a story.

See, people wanna talk about themselves.

And if you ask them about their story for their video testimonial, you’re giving them an opportunity to tell more about themselves and their experience. 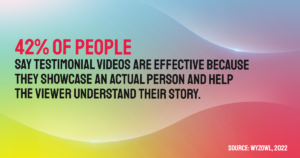 So ask them for a story.

But of course, there is a specific way of asking for their stories.

(All of which we’re going to talk about in future blogs).

We’ve made a lot of people cry.

Obviously, in a good way.

Because that’s what we want from them.

Otherwise, what’s the point of putting together a Video Testimonial that sounds robotic and awkward?

It all starts by understanding what Video Testimonials are all about.

We prefer to call them Video Case Stories.

But you’re gonna hear more about Video Testimonials throughout this series of blogs (it’s for SEO purposes).

In the meantime, if you have a video case story that needs to be shot and made, click here to get started.

No comments to show.